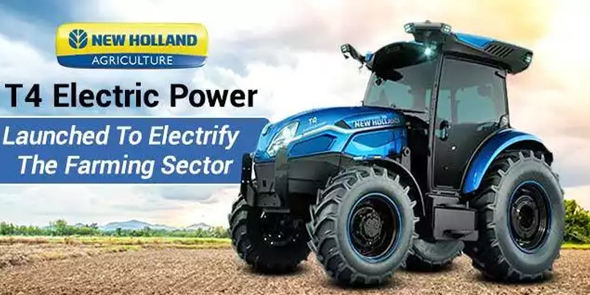 A milestone was reached in the quest for electrification of the agricultural machinery industry in recent weeks, as CNH, the manufacturer of New Holland and Case IH equipment, unveiled its 120HP “T4 Electric Power Tractor”, the sector’s first all-electric light utility prototype with autonomous features.

While autonomous features have already made significant inroads into the farming sector (as we wrote in November), its electrification is still in its early days and, for now, only concerns light machinery. The theme spreading to heavier machinery going forward is important, because agriculture accounts for around 10-20% of greenhouse gas emissions, according to various reports.

Accordingly, CNH’s announcement truly marks a breakthrough, also because the power and usage requirements even of a light utility tractor are significantly different from those of a personal automobile, for example. Today, diesel engines remain the most common power source in agricultural equipment due to their more powerful torque and reliability requirements.

The main issue with electric tractors and other large farming machinery is that battery-powered alternatives lack the energy density of a diesel model needed to perform prolonged, difficult work in the field. In other words, the main issue with pulling a large piece of machinery is that it may quickly deplete the battery owing to the effect that load has on battery life.

To solve the problem, compact, interchangeable batteries have been created by some manufacturers to increase operating time. Privately held Solectrac is one of those manufacturers, which introduced last year a 70HP electric tractor, featuring a swappable battery pack. Meanwhile, CNH claims that its T4 prototype’s battery pack delivers up to a full day of operation and takes just one hour to reach 100% power with fast charging systems, i.e. enough for a farmer to escape troublesome and expensive solutions to cope with battery life (Solectrac’s swappable battery pack for example carries a price tag of $18’000).

As CNH’s announcement proves, attempts to electrify agricultural vehicles are evidently well underway, especially because the 100HP threshold has been broken through, a level consistent with carrying out more extreme farming activities, such as harvesting on rocky soil and conducting heavy duties like cultivation, tilling, and harvesting. The same applies to construction machinery and vehicles, with Deere unveiling during the recent Consumer Electronics Show (CES) an electric excavator.

Nevertheless, the CNH T4 tractor remains a prototype and won’t be commercially available before the end of the year. And a lot more work and ingenuity will be required to fulfil the most demanding power specifications for agricultural gear, which in the most critical cases call for more than 600HP.

Notably, the jury is still out on whether batteries or hydrogen will win over heavy-duty tractors. For now, the low-energy density of batteries, their massive weight and their long charging times make hydrogen fuel cells an attractive zero-emissions solution and many initiatives and prototypes are heading into that direction. For instance, Cummins, whose diesel engines power trucks and tractors, has been betting heavily on hydrogen fuel cells and electrolyzers for all kinds of applications. CNH’s New Holland has a tractor powered by a hydrogen-diesel fuel mix to enhance power and reduce emissions. And Deere recently presented an ammonia-powered tractor, whose system converts the energy-dense ammonia into hydrogen and then powers a 100 kW hydrogen fuel cell.

Another challenge is price. While CNH’s T4 reportedly cuts operating costs by up to 90% thanks to lower maintenance costs and its zero-fuel design, pricing has not been provided yet. Chances are that the T4 will be costlier than comparable diesel tractors due to the battery cost. But as batteries are mass-produced for the car industry, their price should rapidly decline and get close to parity with diesel.

Regulations and subsidies fostering the shift to electric tractors could also emerge at some point.

Finally, tractor makers could also be tempted to speed up adoption of this new generation of tractors by lowering upfront costs and charging subsequent subscriptions for the self-driving feature and other software options.

In conclusion, electrification, automation and robotics in agriculture are in their early stages but appear as a secular trend that will spark a major equipment upgrade cycle and sustain revenue growth for machinery vendors, well beyond the current soft commo cycle.