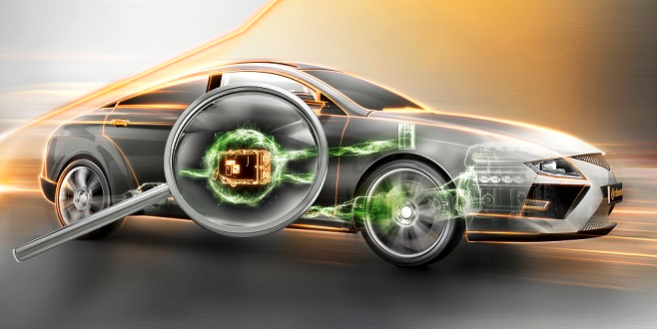 Electric Vehicles (EVs) are all the rage right now, especially since Biden’s election victory and the recent stellar quarterly results from leading pure play EV manufacturers like Tesla in the US and XPeng and Li Auto in China. The upcoming electrification of all vehicles (cars, buses, trucks, forklifts…) keeps on attracting many startups with the dream of disrupting the century old automotive industry.

About one third of our Hydrogen & Electrons certificate is exposed to the enlarged e-Mobility segment. We obviously have a risk-adjusted pocket invested in EV manufacturers and one in battery makers. But we also have a material exposure somewhere else as we believe that in every gold rush, an astute strategy is always to invest in the “shovel makers” or, what we also call, the industry’s common denominator. Here, we are talking about automotive semiconductors, and more specifically power semiconductors.

According to Mordor Intelligence and Deloitte, the global auto semiconductor market is growing at about 17%+ per annum and the amount of electronics in cars is expected to reach half (!) of vehicles’ total cost by the end of the decade. The main growth drivers are advanced infotainment systems, connectivity (to 5G networks), improved safety and autonomous driving systems. But, as next generations of vehicles will all have electric powertrains (either pure electric or hybrid), the demand for power semiconductors is literally shooting to the roof.

Electric powertrains are operating at high voltage (from 400V up to 1000V) and need discrete electronic components to convert (from DC to AC and DC to DC) and regulate the electric power provided from either a battery or a hydrogen-operated fuel cell. As traditional silicon-based semiconductors were not designed to function at such elevated electric tensions, the industry searched for other semiconductor materials or combinations (called compounds) to solve this issue. Currently, the two solutions are called GaN (for Gallium Nitride) and SiC (Silicon-Carbide).

Here, the important point, is that the use of these two compounds increases the global efficiency of EVs because the high thermal conductivity of SiC/GaN-based components allows to transfer more power and hence drastically reduce charging times.

These compounds are also key in increasing vehicles’ range as they allow to reduce heat losses (which, for a vehicle, means energy and then range loss) in the power electronics block (inverter, regulators…). GaN and SiC based power semiconductors are thus key elements to reach the 2024-2025 objective of total cost parity with internal combustion engines (ICE).

Auto semis leaders like Infineon, STMicroelectronics or NXP are involved in the development of SiC/GaN based solutions but more focused companies like Cree or II-VI in the SiC segment and On Semi or IQE in GaN are offering higher return potentials as well as the possibility of being taken over in the near future.

The likelihood of a full economy reopening next year is high and will probably trigger a rebound in cyclical industries with surging car sales. As already mentioned before, all new cars will be equipped with electric powertrains as the roadmaps of car manufacturers all over the world are aiming for the full electrification of their fleets on a 2025-2030 time horizon. The global penetration of electric cars is currently at around 3% and is expected to reach 20%+ by 2030.

Technological advances in batteries and power semiconductors as well as manufacturing efficiencies are relentlessly lowering EVs’ total costs, allowing to reach price parity with ICE certainly sooner than originally expected. Furthermore, the remaining hesitant consumers will be convinced when they will be exposed, either in real life or through medias, to the accelerating rollout of charging points across the world and the broad coverage that these networks will reach in a couple of years.

Over the coming decade, the annual unit growth rate of EV vehicles is expected to reach a level of more than 20%. Adding the growth rate linked to the increasing penetration of SiC/GaN-based power semiconductors in EVs results into a 5-year CAGR of more than 30% for this specific segment of the semiconductor industry.

As the players in this field are well known, new entrants are quite rare (for obvious complexity reasons) and manufacturing capacity cannot be added overnight, the visibility in the SiC/GaN power semiconductor subset is quite high, something that cannot be stated yet about the electric car industry.