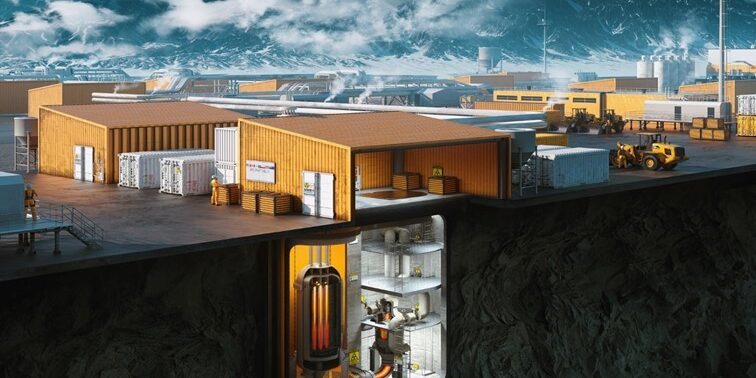 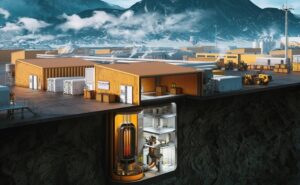 Amid the current energy crisis, nuclear power is making a come-back despite ongoing nuclear waste issues. The idea has gained acceptance as nuclear energy is increasingly considered essential for combating climate change, following the International Energy Agency (IEA) and the Intergovernmental Panel on Climate Change (IPCC) incorporating nuclear in their models and estimates for a net-zero future.

Even though several nations still reject the technology (including Germany which is phasing it out, Italy, Spain, Belgium and Austria), Finland just started up its first new reactor in more than 40 years, the UK recently announced plans to raise its nuclear capacity from 7GW to 24GW by 2050, France (with 70% of its electricity stemming from nuclear power) is to reverse plans to close existing reactors and build six new ones by 2050, South Korea pledged to boost nuclear investments in a revamp of the country’s energy mix. And China is building 19 of the 55 nuclear reactors currently under construction globally.

Interestingly, this renewed interest in nuclear comes at a time when the industry is making its technology revolution with the advent of more nimble reactors, called Small Module Reactors (SMRs), as already commented in our March write-up. These SMRs are expected to handle the challenges (poor safety, delays, and cost overruns…) that have plagued nuclear reactors over the years and are considered a next-generation energy source due to their modular construction, reduced costs (15% to 40% lower capex) and better safety.

Because large-scale nuclear power stations take an average of six to twelve years to construct, and the permission process can take much longer, SMRs’ scalability and faster deployment (only three to five years of construction), along with ease-of-installation and use (assembled on-site), provide a comparative advantage.

While SMRs can come with distinct technologies notably regarding their cooling systems, they all share a common feature: improved safety compared to traditional reactors. Recently-listed start-up NuScale, that develops what is called a light water reactor (using water as a primary coolant), has a passive cooling system. This means that the reactor is capable of automatically cool down even with a power outage and requires no intervention from an external operator or computer to do so.

Another (non-listed) start-up, TerraPower, uses a different type of reactor which uses molten salts as a coolant. The upside from using molten salt for cooling is that the reactor can run at higher temperatures, making it more efficient, but most importantly, the cooling system runs at atmospheric pressure, reducing costs and the risk of a large break and loss of coolant as a result of an accident, thereby enhancing the safety of the reactor. Molten salt reactors also generate less high-level waste and do not require solid fuel, eliminating the need for building and disposing of it.

Seemingly, the lead-cooled fast reactor used by private company Newcleo is an advanced technology that shares its advantages with molten salt technology. The lead-cooled systems may also run on waste from conventional plants, so they don’t need uranium that has been extracted.

In all, SMRs may produce around 300-500 MW per unit (compared to 1-2GW for traditional nuclear plants) and provide reliable energy in the form of both electricity and heat to power a city of about 100,000 people. They are also perceived as a way to provide additional capacity to supplement wind and solar power where and when needed, especially in the wake of their average life-cycle CO2 emissions, which also rank among the lowest, and even lower than traditional large nuclear plants.

Accordingly, many SMRs are envisioned for sectors such as industrial applications or rural places with low grid capacity, where they may be assembled and transported to a spot for installation and can be tailored to specific use cases.

Interest for nuclear power and SMRs is then rising. While Bill Gates co-founded SMR company TerraPower a couple of years ago, Elon Musk and Jeff Bezos praised and/or invested in the nuclear industry recently. Large corporations are also coming back to nuclear with, for instance,  SK Innovation, which is South Korea’s No. 2 conglomerate and a leading energy company, announcing it was planning an equity stake in TerraPower.

Policymakers are also joining the bandwagon to promote the advantages and the deployment of SMRs. In the wake of the G7 infrastructure partnership announced last week for example, the US Government will reportedly provide resources to Romania, for the deployment of a first-of-its-kind SMR facility by 2030, in collaboration with NuScale. Among other objectives, the investment targets the clean energy transition, the strengthening of the European energy security, while also supporting the economic and national security interests of the US and its allies.

Overall, SMR reactors are well positioned to provide for the 16500GW carbon-free capacity additions needed by 2040. This large addressable market is attracting more and more funds and newcomers. As of today, for instance, around 60 SMR projects are underway (see chart below). However, only 3 projects are operational, 3 under construction, and the rest is at the conceptual design, or in development stages. If we take an average of a decade for a project to complete, it is safe to say that the number of operational reactors will multiply by 10 by the end of the 2020’s. 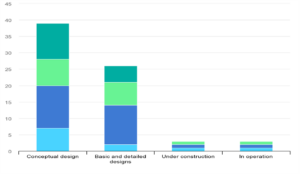 If SMRs appear as the future of the nuclear industry, the number of investment vehicles if for now extremely limited. Founded in 2000, NuScale went public in early March, thereby becoming the first listed company exclusively focused on the conception and deployment of SMR technology. While the company is positioned to become a leading player in SMRs along with TerraPower, we would caution that the company could face liquidity issues at some point given that the company’s first SMR is not expected to come online before 2029 and that the company’s financing, which was provided in large part by the Department of Energy until recently, could become more difficult in the current environment.

Industrial conglomerate Rolls-Royce could be a safer, more diversified alternative to enter the space as the company joined the race to create SMRs as soon as 2015 with some backing from the UK government. Thanks to the political commitment to accelerate the reactors’ development (thereby securing more local energy sources in the aftermath of Russia’s invasion of Ukraine), Rolls-Royce advanced by one year to 2029 the deployment plan of its reactors. And this week, the company chose its shortlist of locations in the UK for its first factory to build a fleet of SMRs.

BWX Technologies is another industry player, specialized in nuclear engineering, supplies among other specialized equipment components for the moderator heat exchangers in nuclear reactors. It has already partnered with NuScale and TerraPower, not to mention the US Navy and the Pentagon or Chinese nuclear operators. Finally, Lightbridge provides another example (albeit somewhat more speculative), which has reportedly created a patented, promising, and innovative nuclear fuel that may be used in a variety of reactors.

While SMRs seems to offer a whole new perspective on clean energy, a Stanford University-led study concluded that tiny modular reactors would face higher neutron leakage than conventional reactors due to their smaller size, resulting in a nuclear waste increase by factors of 2 to 30 (compared to conventional reactors). Meanwhile, critics argue that the lack of quality guaranteed test data in the report is a compelling cause to distrust the study.

In conclusion, while the industry is in its infancy, the appeal of creating smaller nuclear plants, in a quicker fashion and at a lower cost, based on a predetermined design seems obvious to us – provided the waste issue becomes manageable. It follows that the technology is likely to become more attractive to smaller utilities, which currently cannot bear the implied capex weight and the associated operational risks of traditional nuclear plants. Moreover, as it becomes increasingly clear that renewables can only provide a fraction of the clean energy required by 2050 to meet net-zero emission goals, we wouldn’t be surprised to see the SMR technology theme gaining traction in policymakers’ discussions, not to mention investors’ asset allocations.