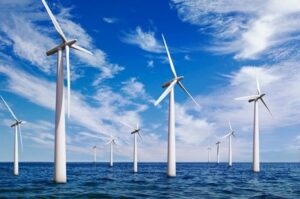 Wind energy players Vestas and Siemens Gamesa and supplier TPI Composites have reported underwhelming earnings and cut guidance in recent quarters due to a combination of weak revenue momentum (flattish installations globally in 2021), cost inflation (steel and resins, logistics) and supply chain issues. And Covid-linked lockdowns in China are unlikely to help in the short-term.

That said, with a demand picture improving thanks to government policies and new commercial initiatives (price increases, higher scrutiny of project profitability) kicking in, we believe that current stock price weakness for Vestas and Siemens Gamesa could soon represent an attractive entry point considering that earnings, that are expected to be negative for both companies in 2022, could materially improve starting in 2023.

The European Union’s pledge to reduce by two-thirds its gas imports from Russia by year-end and to zero by 2027 is filled with challenges in terms of finding short-term, and long-term alternatives. Not only because Russia accounts for more than 40% of the region’s gas imports, but also because the plan comes on top of other large recent energy transition commitments to address global warming like the EU’s ‘Fit for 55’ plan (a binding commitment to cut emissions by 55% by 2030), calling for a share of 40% renewable energy sources in the overall energy mix, compared to 32% today.

While short-term solutions include imports of liquefied natural gas (LNG) from producer countries like the US, Qatar or Algeria, renewables have clearly been spelled out by some of the EU’s largest members as the preferred option longer term, providing a tailwind to solar and wind power alternatives.

German policymakers now label renewable energy a “national security issue” and target 80% of renewables in the country’s power mix by 2030, up from 65% previously. As Italy also imports about half of its natural gas from Russia (accounting for around 45% of the country’s energy mix), Italian policymakers are also bracing for energy alternatives including renewables.

Among several clean energy initiatives, the European Commission’s ‘REPowerEU’ plan calls for accelerating the deployment rate by 20% of an additional 480GW of wind power spelled out under FF55, i.e., around 115,000 onshore and offshore wind turbines across the European Union.

While critics have been loud since the start of the conflict in Ukraine in condemning Germany for its refusal to immediately cut its energy reliance on Russia, the newly elected government presented its ‘Easter Package’, i.e., what it called the “biggest energy policy reform in decades”, which advocates for a substantial growth in wind and solar additions in order to reach a nearly 100% sustainable power supply by 2035. With regards to wind power, the path calls for an installed onshore and offshore wind capacity of 115GW and 30GW by the end of the decade (totalling roughly 35,000 wind turbines).

In a commitment to achieve this ambitious goal, the German government developed the notion that the utilization of renewable energies is of paramount public importance and will override other concerns until climate neutrality is achieved. This aspect is especially important for wind power, as legal issues such as obtaining building permits, respecting distances between wind-turbines and residences/weather stations, as well as dealing with local oppositions and contradictions with other environmental goals have historically significantly slowed down the development of wind farms.

Thanks to these new rules, Berlin anticipates that about 1’200 new wind turbines (5GW) will be deployable over the next few months. Meanwhile, German policymakers will draft their ‘Summer Package’ shortly, which is likely to cut average approval times for new wind farms significantly further, down from six years currently.

But Germany is not alone in its quest to accelerate its wind power deployment. The Mediterranean Sea is about to see its first offshore wind farm by May this year, thanks to Italy also embracing an energy revolution, as the economy, has already phased out nuclear power completely. The Beleolico farm, which will be located on the coastline in Puglia, will have ten bottom-fixed turbines, powering 21,000 households. Other large-scale projects include 190 turbines off the coast of Sicily, which would generate enough electricity for 3.4 million homes. Nevertheless, oppositions and permitting also cause delays averaging six to seven years, prompting PM Mario Draghi to promise his government will undertake the necessary streamlining of procedures, providing proper ground for an acceleration in investments.

Owing mainly to more stable and stronger wind conditions compared to onshore, policymakers and professional associations favour offshore wind power. Accordingly, Wind Europe has recommended to deploy 450GW offshore by 2050 to achieve climate neutrality, with 212 GW in the North Sea, 85 GW in the Atlantic (including the Irish Sea), 83 GW in the Baltic, and 70 GW in the Mediterranean and other Southern European waterways.

While wind power has drawn increased attention from European policymakers, it could also gain momentum in the US where solar-based technologies have recently met some significant headwinds owing to international trade issues, with the Commerce Department is investigating whether Chinese solar equipment producers circumvent existing tariffs and anti-dumping duties imposed on them by setting up export facilities in Vietnam, Cambodia, Malaysia, and Thailand.

But the risk is on the upside in our view, should governments get serious about the implementation of net-zero goals. The IEA notably estimates that global wind installations would need to reach 390GW per year in 2030 or ~4x the level achieved in 2020 if the world wants to stay on-course for net zero by 2050.

Furthermore, the sector would be provided with another strong tailwind, should US utilities start favouring wind projects in relation with the above-mentioned solar investigation.

Technological improvements providing more power as a result of greater turbine sizes and blade lengths (e.g., Gamesa’s new line of ‘5.X turbine’, with blade spans ranging between 155 and 170m and 5.6 – 6.6GW outputs) could be another reason to upgrade or expand wind farms. Chinese equipment manufacturers in the space should not be underestimated, with for example Shanghai-listed Ming Yang Smart Energy taking the record last year from GE Wind for the tallest offshore wind turbine (242 metres), capable of powering 20,000 homes.

Profitability at an inflection point

On top of these robust growth prospects, the profitability outlook is set to improve by 2023. Both Vestas and Gamesa have indeed started to amend their commercial terms and raise prices to respond to cost inflation and Gamesa notably stated that it targets price increases around 10%.

To be clear, the current price increases will take time to materialize and flow through EBIT margins and we would expect the full impact to be felt only in 2024-25.

Importantly, this pricing strategy can be achieved without significant market share losses in our view as Vestas and Gamesa along with GE Wind and Nordex operate in an oligopolistic market in Europe and the US (with an estimated 80%+ market share) with limited competition from low-cost Chinese suppliers.

And even if price hikes from European and US turbine manufacturers were to open some market opportunities for Chinese turbine suppliers, it’s likely there would be significant lobbying initiatives around trade tariffs to preserve domestic markets from this low-cost competition.

In conclusion, we believe that, after a very tough year, the wind sector deserves attention as investor sentiment could improve on the back of a clearer profitability outlook. While reasonable, valuation multiples are still not cheap at more than 25x 2024 EPS but another sell-off / multiple compression could represent an opportunity to invest in an industry that will be key in the energy transition of the next decades.