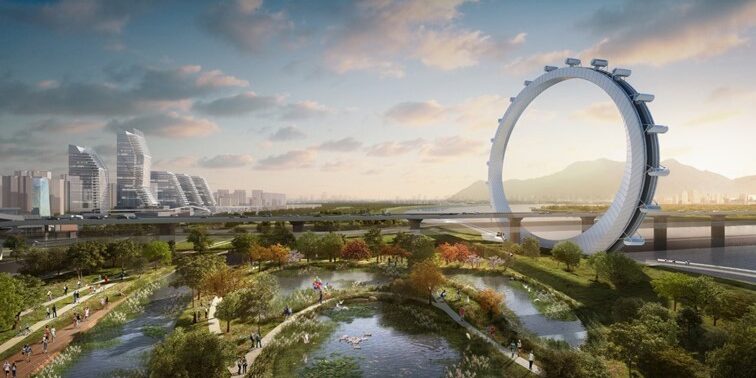 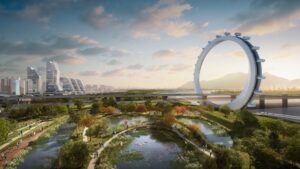 While there’s been a lot of talk about the increasing number of droughts across the world in relation with climate change (recent restrictions on outdoor watering in Southern California being the latest example), there’s also been, quite ironically, an increasing number of devastating floods as the rapid urbanization pace reduces the land available to absorb rainwater. According to consulting firm Arup, over the last 50 years, 44% of disaster events have been flood-related and 700 million people live in areas where the daily maximum rainfall has increased.

As climate change promises to bring more frequent and intense rain events, the concept of sponge cities, that combines natural “green” infrastructures with “gray” infrastructures to prevent flooding, is then gaining traction and several major cities in the world are in the process of becoming “spongier”.  Arup even provides a ranking of cities’ “sponginess”, with for instance NYC soaking up water at a rate of 30%, well ahead of London at 22%, but behind Auckland at 35%.

But Chinese cities are leading the way. With over 60% of its 1.4 billion population now living in urban areas, China has seen its paved surface increase considerably over the last 20 years, opening the door to disastrous events. In 2020 for instance, more than 400 rivers overflowed impacting 50 million people across the country. Moreover, 67% of China’s population live in flood-prone areas today and this number is expected to further increase.

This is in part because patches of lands that would have originally absorbed the water, are now repelling it, directing flows into artificial channels that cannot withstand water volume upswings due to storms or heavy rain. The so-called “gray” infrastructure (streets, drainage and sewage systems that are mostly made of concrete), that is designed to gather the water from the streets and evacuate it away, is more and more often overwhelmed with the rising number of climate episodes and the risk of flooding increases proportionally.

Also, a counter-intuitive impact of the current design of “gray” infrastructures is that they can cause water shortages. Indeed, the natural process of water soaking into the soil to settle underground is cut short by the pavement making it run too fast to incorporate within natural reservoirs.

Sponge cities are taking on those challenges by converting urban areas, with the help of engineering, to let them handle rainwater to re-establish an ordinary hydrological cycle. Soaking the water, storing it, and releasing it when needed are the three main pillars of these new urban developments, the concept here being to mimic sponges, hence the name.

To unleash the full potential of sponge cities, massive investments in both “green” and “gray” infrastructures will need to be done.

“Green” infrastructures appear as a new and sustainable rainwater management solution, likely to complement traditional systems, with the focus currently being on rooftop vegetation and curbside rain gardens. Wetlands and retention lakes are also the way to go for the water that is not going back in the natural circuit. Artificial lakes can be built inside parks and have the advantage to offer habitat for biodiversity but also provide irrigation water.

At the “gray” level, water absorption can be achieved by paving streets with permeable concrete or building buffer zones next to rivers instead of restraining them. The use of pervious concrete, a high-porosity form of concrete used for concrete flatwork applications that allows water from precipitation and other sources to pass through directly, decreasing runoff and allowing groundwater recharging. Moreover, it decreases drainage infrastructure capacity needs and is letting air and water through, allowing for trees to develop extensive root systems, even in densely populated areas.

Needless to say, such sponge city developments would also require a total revamp of the legacy “gray” water infrastructures (drainage and sewage) that can be overwhelmed during heavy rains.

While flood prevention is the immediate objective of sponge cities, sustainability is not far behind. Amid the risk of water supply/demand 40% imbalance by 2030, sponge cities would bring many benefits, including rainwater collection, improved air quality within cities thanks to rooftop vegetation and cooler temperatures thanks to soil moisture evaporation.

China, which pioneered the sponge city model, plans for 80% of its urban cities to harvest and reuse 70% of rainwater by 2030. To get there, China will need to spend an estimated $230 billion. In the US, New York estimated that completely “flood-proofing” the city would require $100 billion, compared to the $1 billion already deployed.

These massive investment requirements clearly show that the water spending packages such as the $55 billion one included in the US Infrastructure Act are likely just a first step and that water infrastructure is on a secular growth path.