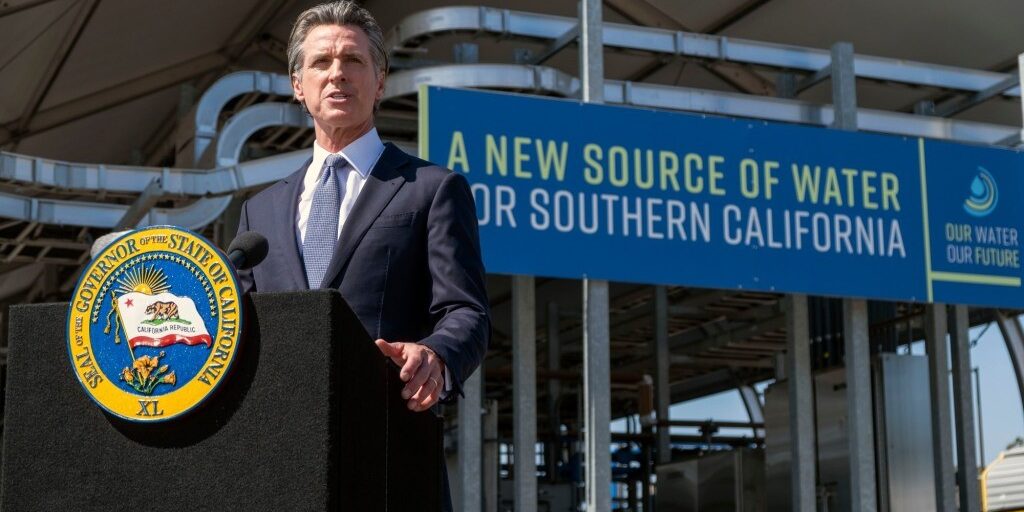 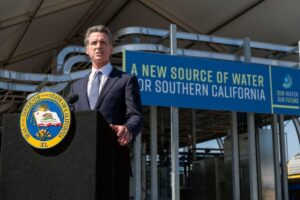 If California has been a driving force behind the rise of clean energies and adoption of electric vehicles, it could soon take on the same role in the blue revolution. Governor Gavin Newsom recently released a plan called “California’s Water Supply Strategy, Adapting to a Hotter, Drier Future” aimed at improving water supply amid historic droughts and based on water recycling, desalination and storage.

The plan reflects Californian authorities’ conviction that if nothing is done, extreme weather could reduce the state’s water supply by up to 10% by 2040. To compensate for increased evaporation caused by warmer average temperatures, it calls for an increase of the state’s yearly water availability by 4.8M acre-feet (4.9B m3) by 2030 and by 6.9M acre-feet (7.4B m3) by 2040.

Water recycling will see the largest volume increase. From an additional capacity of 0.8M acre-feet by 2030, another million acre-feet capacity will be added by 2040, to 1.8M acre-feet. At around $15,000 per acre-foot, achieving the 2030 and 2040 targets would respectively require $10 billion and $27 billion in investments from the state, local, and federal governments.

California’s water strategy then highlights a recycling investment opportunity that is massive on a global scale as, today, only 1% of used water is recycled worldwide (with some exceptions, e.g., 90% in Israel). Recycling indeed faces financial, technological, and psychological barriers: one must be sure that all the pollutants have been removed and that water is totally clean before reuse or disposal. But adoption is expected to rise dramatically thanks to corporate and public initiatives, with some governments heading towards more supportive recycling regulations. As an illustration, Europe targets 6% of water recycling by 2025 vs. 2% today. And California could give a massive boost to the technique in the US by inspiring other states.

Desalination technology is also a key pillar of Governor Gavin Newsom’s water plan, as we depicted recently. Over the 2030-2040 decade, the largest rate of increase in Californian water supply will be made available through desalinated water production, with additional capacity which should rise threefold from 28 000 to 84 000 acre-feet and benefit from a much softer permitting framework for desalination facilities. These targets highlight that the investment opportunity within desalination technologies is a massive one as well. On a global scale, desalinated water only accounts for about 1% of the world’s fresh water, while saltwater accounts for 97% of Earth’s total water.

Meanwhile, California’s plan recognizes that because of climate change, more water must be stored in reservoirs and aquifers, a move that may also correct for decades of over-pumping of groundwater basins. And groundwater recharge is one of the quickest, most cost-effective, and widely available ways to use the water abundance of wet years to cope with dry years. In this regard, if all of the 340 water storage projects are carried out by 2030 in California, the plan estimates that an additional 2.2 million acre-feet of stored water could be made available in a single wet year.

On the legislative front, while California Governor’s water supply strategy lays out ambitious plans, it will need the assistance of the state’s lawmakers to be properly carried out so that projects can be planned, funded, permitted, and built without delays, while protecting the environment. Even if the legislative process could meet some resistance and critics (such as the fact that the plan does not address vast water consumption by the agriculture and fossil fuel industries), it’s highly likely that it will get the support of Democrats that have the majority in both houses in California.

The required funding has not been detailed yet, but a spending package in the tens of billions of dollars is probably on the horizon in California. Importantly, this California water plan could arguably give rise to similar initiatives from other US states and could also help accelerate the private sector’s shift towards net water positivity with large companies such as Pepsico and Facebook pledging recently to contribute more water to the ecosystem than they consume.

From an investment standpoint, this should be a boon for providers of water testing equipment (techniques such as chromatography and spectrometry are crucial as the quality and toxicity of wastewater must be evaluated to adapt treatment methods to each effluent), filtration/treatment systems and desalination equipment.