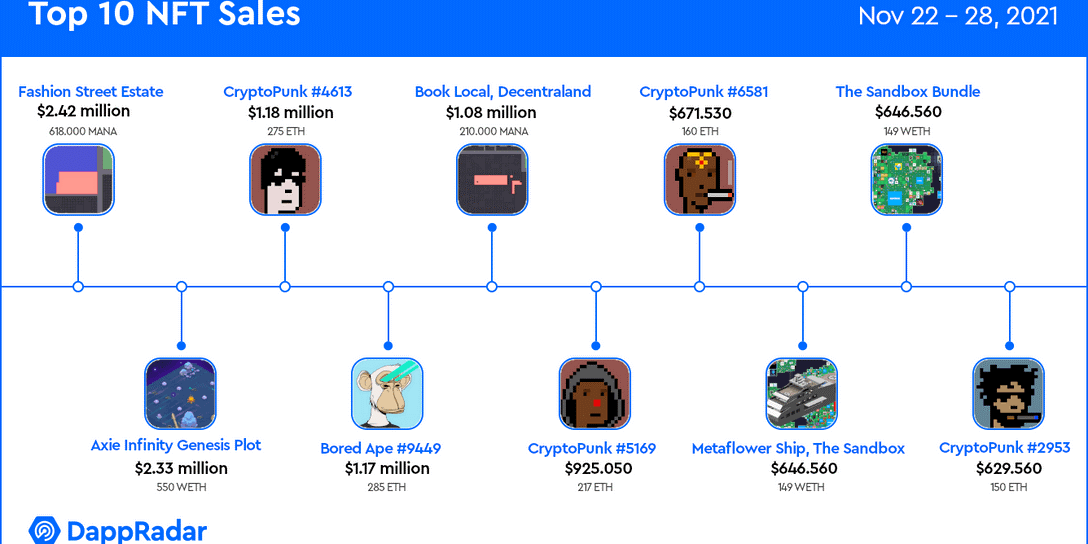 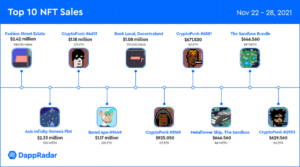 Ten days ago, Nike made the headlines when it announced NIKELAND, its own virtual space in Roblox modeled after its real-life headquarters. This move was followed by Adidas, which teased a collaboration with Sandbox, a blockchain-powered virtual world and followed up with a partnership with crypto exchange Coinbase.

This sudden rush from large consumer brands to build a presence in the Metaverse sparked last week a surge in the volume and price of NFTs (non-fungible tokens) that represent virtual lands or real estate in some of the most well-known virtual worlds.

With a $2.4 million price tag, the Fashion Street, which is expected to play a central role in virtual commerce and events in Decentraland, took the crown. Another land plot in Axie Infinity, a video game that counts almost 2 million daily active users, came second as it fetched $2.3 million.

Overall, half of the biggest NFT purchases last week involved virtual worlds (Sandbox, Decentraland, Axie Infinity) according to DappRadar. While some might argue that this is going too fast too early, we believe that Nike, Adidas and Gucci earlier this year are kicking off a major transition of large consumer brands from a simple online presence to a 3D virtual presence.

Accordingly, demand for virtual real estate should surge and mainly benefit virtual worlds boasting millions or tens of millions of users such as Roblox, Free Fire (Sea Ltd.) or Fortnite (Epic Games) that have massive user bases and already offer or will soon offer social and shopping experiences likely to attract consumer brands.

These largest virtual worlds (if we exclude Sandbox, Decentraland and Axie Infinity that we view as emerging platforms) are not yet blockchain-enabled, suggesting that their ability to develop a virtual goods economy (lands, real estate…) is limited by the non-tradeability of these goods. But, now that new generation blockchains support almost instant and free transactions, some virtual worlds start dabbling into blockchain and non-fungible tokens that are expected to provide a consistent framework to govern ownership and transfer of property of virtual goods.

For instance, Roblox introduced limited edition items coming with rules for royalty payments when they are resold, just like NFTs. And Roblox also hosts PlayDapp, which has launched its own blockchain-powered virtual space where gamers can use unique NFT characters, as well as regular Roblox ones.

In conclusion, we believe that blockchain adoption could be a game changer for all these virtual worlds as it could massively expand their virtual goods economy. Specifically, some of them could become digital real estate empires, selling or renting out pieces of land. And their valuation framework could move from assessing their cash-flow generation to assessing their cash-flow potential AND the value of their land.