Food Revolution: Lab-Grown Meat About To Take Off? 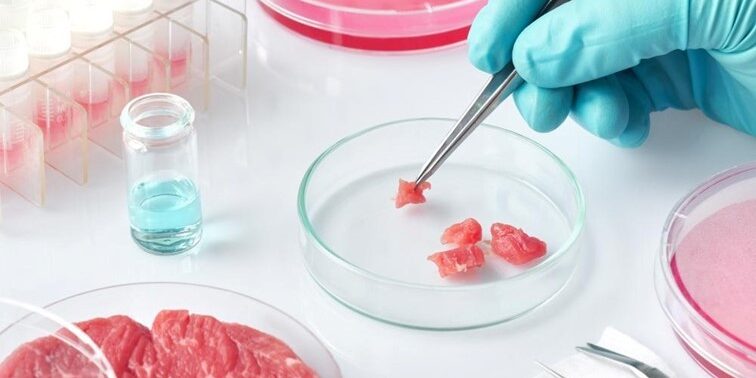 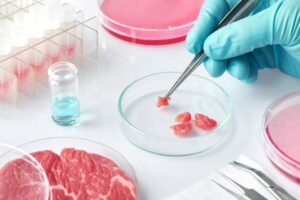 Despite the recent slowdown in the plant-based food category, alternatives to conventional meat keep gaining attention from policymakers, food producers and start-ups alike, amid livestock production producing high greenhouse gas emissions and requiring more land and water per calorie of food than crops.

Accordingly, in his recent executive order on ‘biotechnology and biomanufacturing innovation’, Joe Biden announced plans which would accelerate the emergence of lab-grown meat on an industrial scale, thereby addressing food security, land conservation, climate change and the protection of agricultural yields.

The first ever lab-grown beef burger was produced in 2013 at a cost of around $300,000. But if the production technology scales up to the level of an industrial food process, it could soon be sold for around $10 according to various estimates. In addition to beef, producers target other animal-based foods and goods, including chicken, pork, turkey, fish, egg whites, milk, gelatin, and even leather.

In general, the technology involves muscle cells growing in a nutritional serum and processes that encourage them to form muscle-like fibres. Lab-grown meat obtained this way comes in many other names including synthetic meat, cultured meat, or in vitro meat.

Many of the firms that have emerged in the last few years in the space are still in the start-up phase, as upscaling the processes pose significant technological challenges. The approach generally involves harvesting stem cells through biopsy from live animals, or from a fresh piece of meat and growing/reproducing them in a machine called a bioreactor. In addition to feeding the cells thanks to nutrient-rich ‘serums’ made of amino acids, sugars, and animal blood, the process relies on some of the engineering pioneered in the pharmaceutical sector to make antibodies, vaccines, and artificial organs.

Alongside scalability challenges, industry players face stringent sanitary constraints to market their goods to the public, such as obtaining approval from the FDA and USDA that jointly regulate cultured meat in the US. Meanwhile, the Singapore Food Agency paved the way on this front, when it became the first authority in 2020 to allow the sale of nuggets based on cultured chicken to San Francisco-based Eat Just, in a move to help the city-state reach its goal of producing 30% of its food locally by 2030, up from 10% currently.

Eat Just is among the companies that has been able to scale its production and significantly reduce end-prices to $23 initially for a portion of chicken nuggets in Singapore, thanks in part to the use of a proprietary synthetic replacement to animal-based serum. While attaining mass production and profitability remains an issue at this point according to the company, Eat Just is making progress notably with the signing of an agreement with biotech process engineering company ABEC to build ten 250,000-liter bioreactors for meat cultivation that could produce up to 30 million pounds of meat a year and allow cultured meat to break through as a large-scale, affordable consumer product.

Meanwhile, US-based BlueNalu, which has developed cell-cultures for eight different species of fin fish, expects to operate, as soon as 2027, a 6 million pounds of seafood/year production facility of 140,000 square feet, including eight 100,000-liter bioreactors. Nevertheless, BlueNalu still lacks regulatory approvals for its synthetic seafood and large-scale consumer acceptance has yet to be proven. In this regard, some preliminary indications seem encouraging, as 69% of respondents of a Guardian poll said they want to test cultured meat and another 52% of Dutch-respondents declared they are eager to test lab-grown beef.

Against this backdrop, the space sees companies mushrooming, such as Mayr, founded near Zurich in 2019 and which prepares to launch lab-grown beef in Singapore next year. Other privately-held companies include California-based Novel Farms (pork loin) and SCiFi Foods (burgers), Dutch-based Meatable (sausages), Germany-based Bluu Seafood (synthetic fish sticks and balls), and UPSIDE Foods (chicken meat), through what it claims to be “the most advanced cultivated meat production facility in the world.” Meanwhile, publicly listed Steakholder claims that it can “print” pieces of beef on an industrial scale with “any” ratio of muscle tissue to fat marbling through its 3-D printing platform.

Yet, as another large poll found that people are repulsed by the concept of meat grown in bioreactors, the successful path of this nascent industry still needs to be demonstrated through hard data, in our view.

Accordingly, forecasts for the cultured meat market vary wildly. But one thing is sure: if Joe Biden’s guidelines in his executive order are followed by actual measures such as subsidies and FDA/USDA approvals, lab-grown meat could well complement or even rival with plant-based meat which has been struggling recently due to several challenges including taste, texture and price (see our previous write-up).

Talking about plant-based food, it’s worth highlighting that Joe Biden’s executive also addresses innovations that protect crops from disease and enhance seeds and fertilizers. Within this context, companies that stand at the intersection of biotechnology and food could benefit. Among them, we would mention Benson Hill, which has developed processes to improve the genetics of plants/seeds, thereby boosting their nutrition density, while enhancing their environmental footprint and reducing costs, to address, among others, the needs of aquaculture and animal feed. Ginkgo Bioworks is another player in the field of improving livestock management thanks to potentially higher agricultural yields for animal feed, amid processes that cause nitrogen to combine biochemically with other elements to form reactive fertilizing compounds such as ammonia, nitrates, or nitrites, thereby removing the need for chemical fertilizers.

In the end, if synthetic meat lives up to its promise and effectively becomes significantly more ecologically friendly, cheaper, safer, and even tastier than conventional meat, the prospect of eliminating the mass exploitation of animals for human food-intake may well become a reality in a not-so-distant future. In the short term, as one would expect, the financial environment should not be very permissive for the rare, listed companies (Steakholder, Ginkgo, Benson Hill) that are still very early stage and far from profitability.